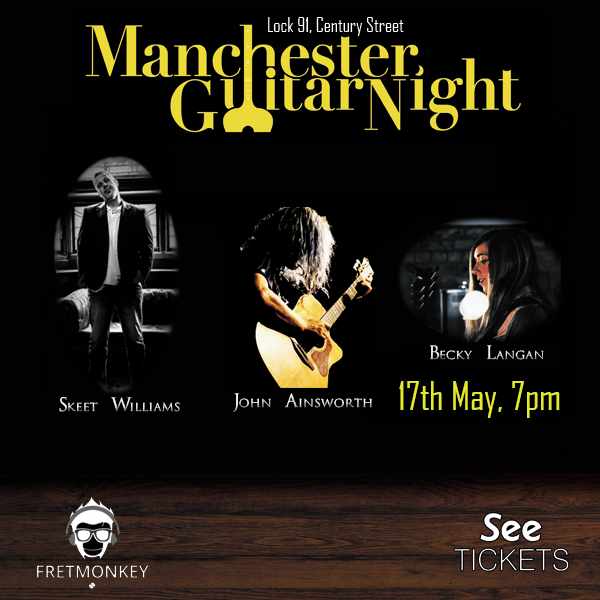 Manchester Guitar Night is the premier event for showcasing unique, virtuoso guitarists from all over the world.

The sixth night of the series presents:

John Ainsworth, aka "Katakaa" is a guitarist and singer/songwriter. His style is of the psychedelic nature but encompasses genres such as fingerstyle, blues, flamenco, eastern influences and metal.

Originally from Hatesh in the Oridian star system he came to earth to play music, learn more about Alan Watts and see if hanging out with humans would be a good laugh.

With a few tours of Canada, USA, Europe and a string of gigs in India under his belt he's decided this will be his last gig on earth for the foreseeable future as he plans to return to Hatesh. There he will take up the great honour of gatekeeper at the ancient city of Mututh back on his home world. Fulfilling his part in his families legacy he will add his experiences of earth to the scriptures of Zubatha for the next travelling wanderer to learn of playing music to earthlings and rocking out before coming to earth.

The grandson of a coal mining, bare knuckle boxing Pentecostal preacher, Skeet is a renowned and dedicated musician who travels far and wide as a session guitarist and as a solo artist. He is passionate about inspiring and encouraging young musicians throughout North Wales and beyond to learn and develop their musicality. In between gigging, appearing at World famous venues such Llangollen International Eisteddfod, he also runs guitar courses. Having played on acclaimed albums in America, Portugal (Sierra Hurtt) and the U.K. (Gary Edward Jones) as a session musician, he now has the time to push his solo career.

Born in Rochdale, England (1992), Becky Langan is a percussive fingerstyle guitarist who employs a combination of extended techniques that explore the outermost reaches of the acoustic guitar.

Becky was a semi-finalist on Guitar Star 2016 (Series 2) which aired on Sky Arts - a TV show which scours the UK to discover a world class guitarist. Throughout this competition, she recorded at Abbey Road Studios with producer Tony Visconti and received mentor sessions from many iconic musicians, including; Tony Iommi, George Benson, Wilko Johnson, Jon Gomm and Preston Reed.

Becky has since grown an appreciative audience from all over the world, and to this day, has generated over 7000 Facebook followers and three million views on one video alone. Following her appearance at the NAMM show in LA, Becky’s ability was soon recognised by some of the most acclaimed brands. She is proud to endorse G7th Capos, ToneWood Amp, Zoom UK, Jim Dunlop and Taylor Guitars, and is honoured to own her own signature guitar strings with Newtone strings.

More Information (Revolution 96.2 is not responsible for external websites)

More details for this venue

The event runs from 7:00pm to 10:30pm on the following dates.
Select a date to add this event to your calendar app.