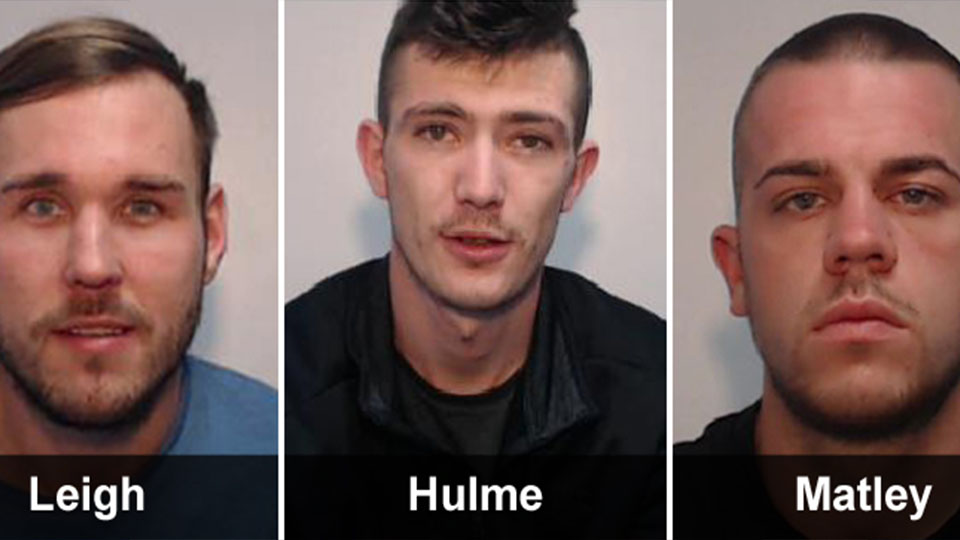 Three men from Tameside have been jailed following a series of arson attacks after an ongoing criminal war, involving cannabis dealing.

The men have been jailed for arson and drug offences, today (Tuesday 3 December 2019), at Minshull Street Crown Court.

He was sentenced to 3 years and 2 months in prison. This is additional to a sentence of 10 months in prison after pleading guilty to the production of cannabis at an earlier hearing.

Jake Hulme, of Anglesey Close, Ashton-Under-Lyne pleaded guilty to being concerned in the supply of cannabis, and possession with intent to supply heroin and crack cocaine. He was sentenced to 4 years in prison after pleading guilty at an earlier hearing.

A few weeks later, on 13 January 2013 there was a deliberate car crash and a violent confrontation between a group of men on Mootram Moor in Hollingworth.

A gunshot was fired on in the Hattersley area during the early hours on the same day, before the third arson attack occurred a short distance away on Callington Drive. These incidents were believed to be as a result of an ongoing criminal drugs dispute where a drug debt was owed.

Leigh and Matley were arrested in on 23 January 2018 in connection with the arson attacks in the Tameside area in December 2017. The fires had caused over £110,000 worth of damage.

Leigh was arrested at his home address where officers found two mobile phones he had attempted to destroy, and 19 cannabis plants were also discovered drying in his loft.

Matley was also arrested at his home address where officers recovered petrol canisters and a document detailing how to set up a cannabis farm.

A dedicated group of detectives continued the investigation into the men, and identified that Leigh and Matley were heading up a criminal group heavily involved in the production and supply of cannabis on a large scale, with Hulme supplying the drugs on the streets and maintaining the crop.

It was discovered that Leigh and Matley previously had a cannabis farm stolen from them by a rival group, which is believed to have led to the series of retaliatory arson attacks over the drug dispute.

Telephone evidence revealed messages and videos between the men discussing the arson attacks, and the production and handling of the cannabis farm.

On 18 May 2018, officers obtained a warrant for Hulme’s home address where he was arrested on suspicion of arson. Officers found £100 worth of cannabis bush, large quantity of empty snap bags, digital scales and over £700 in cash.

Hulme was released on bail, and then further arrested in a stolen car and found to be in possession of several hundred pounds worth of heroin.

Detective Inspector Joe Harrop, of GMP’s Serious and Organised Crime Group, said: “It is thanks to the hard work of all the officers in this investigation, that these criminals have been stopped from overrunning our streets with such drugs.

“These men went to carry out the arson attacks with the intention of putting the lives of the occupants and others at risk. Thankfully no one was injured but the consequences could have been much worse.

“Drugs destroy relationships and ruin our communities, causing considerable damage not only to drug users, but also to those caught up in criminal supply groups.

“I hope this sentencing sends a clear message that we will pursue those who supply harmful drugs and we will go to great lengths to bring them to justice.”