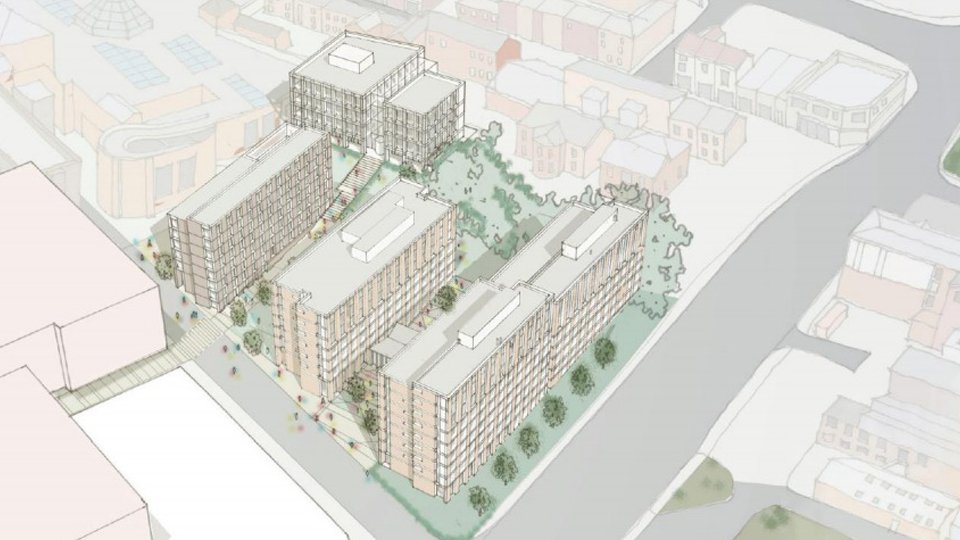 Plans to build hundreds of apartments in Rochdale town centre have been given a major boost after local leaders signed off a £4m loan ‘in principle’.

Plans to build hundreds of apartments in Rochdale town centre have been given a major boost after local leaders signed off a £4m loan ‘in principle’.

The decision to lend the cash for ‘Phase Two’ of the Rochdale Riverside development has been agreed by Greater Manchester Combined Authority – and will be matched by investment from Rochdale council.

The money will come from the £300m Greater Manchester Housing Investment Loans Fund (GMHILF), which supports residential development across the region.

Phase One of the development – due to open next Easter – includes a new shopping centre boasting the likes of M&S and River Island  – and a six screen Reel cinema.

But the GMHILF money will help bankroll the next stage – which includes development of 228 ‘affordable’ new apartments  across three buildings.
The council has clarified these will be at market rate which, they say, is affordable by default in Rochdale compared to other areas in Greater Manchester.

The site, near Smith Street, would also feature new green space. It is currently being used to store building materials from the first phase.

Offices and a hotel are also planned for further down the line, but would be funded differently when the council has finances for that part of the scheme in place.

The ‘Rochdale Riverside’ project is a joint venture between the council Genr8 and Kajima – and part of a wider £250m regeneration of the town centre.

Coun John Blundell, Rochdale council’s cabinet member for regeneration, say the move is recognition of the authority’s ‘clear’ plans for the heart of the town.

He said, “It’s exemplary of the schemes we have in Rochdale.

“If you look at how far our plans have developed compared to our neighbours, we have a lot of stuff ready to go.

“We have a clear pipeline and we are going to continue to enhance that pipeline.

And he claims Rochdale is ahead of the game compared to some of their neighbours.

“I think we have set our stall our better than comparable other boroughs – and that’s why we are seeing the money trickling in,” he said.

“I think if you look at Oldham and Bury we have more plans out there in public saying ‘this is what we want to do’ so we are getting more money.”

Council leader Allen Brett said he was ‘grateful and very pleased’ for the support of the ‘ongoing development of the town centre’.

The report that went before local leaders say it is anticipated that the value of the scheme could increase by more than £4m by 2028 –  enabling the full repayment of the GMHILF investment at that time.

The council would retain their investment for a longer period to benefit from further value increases – although this is not guaranteed and meaning there is a risk that the GMHILF investment could be lost in full.

GMCA bosses acknowledge there is a financial risk involved but say they are ‘confident’ of recovering the investment.

Speaking at a meeting of the GMCA, Greater Manchester Mayor Andy Burnham said: “This is a very important investment to support our vision for  revived town centres across Greater Manchester, particularly as new residential locations.

“We have the Stockport Mayoral Development Corporation and great progress being made there, and it’s really pleasing to see Rochdale coming through now and we can see the change already coming through in the town centre.”

The loan is subject full approval of the investment being signed off by the combined authority in due course.

Work is expected to start on the apartments next June.

The meeting of the Greater Manchester Combined Authority was held on Friday, November 30 at Rochdale Riverside.