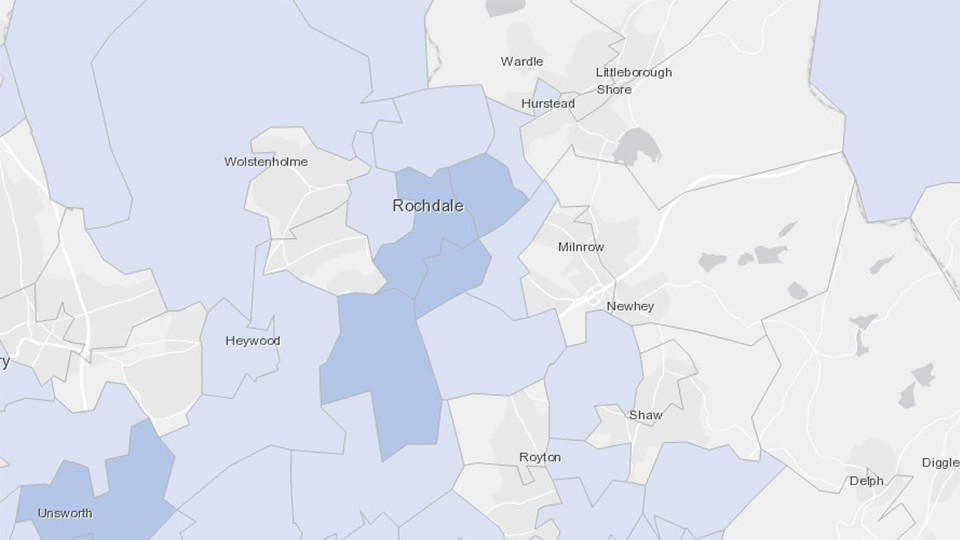 A coronavirus hotspot ‘cluster’ has emerged in central Rochdale – but the council’s health chief says this may not be the bad news it seems.

The borough has been placed on ‘red alert’ after seeing the biggest rise in infection rates in Greater Manchester last weekend.

Standing at 63.4 cases per 100,000 people for the week ending September 9,  its rate is currently the fifth highest in the region behind Bolton, Tameside, Salford and Manchester.

The Public Health England (PHE) heat map suggests that cases are now largely concentrated in three neighbouring areas at the heart of the town.

Wardleworth and Newbold Brow reported 18 cases during the week ending September 5,  Central Rochdale and Mandale Park had 13, while Castleton and Trub saw 10.

Aside from Middleton East (11), nowhere else recorded double figures, although several places across the west and south of the borough had between three a nine cases.

High infection rates in central Rochdale have been a long-standing challenge for the borough’s public health chiefs – and , on the surface,  the latest data seems to suggest the virus is bouncing back in the area.

But Coun Sara Rowbotham, cabinet member for health and wellbeing, says it could reflect the fact that more people are willing to get tested, because of the package of support the council has put in place for those having to self-isolate.

The authority has a Covid Emergency Assistance Fund – part funded by a £350,000 government grant – and this includes an Isolation Fund for those who have been told to stay at home.

Many low paid workers are reluctant to be tested, as a positive result would put them out of work, plunging them into hardship.

Statutory Sick Pay is often not enough to cover essentials like food and energy, while the first Universal Credit payment for those forced on to benefits can take weeks to come through.

And Coun Rowbotham says the statistics may be telling a more positive story than it would appear on the face of it.

She said: “Maybe the positive spin on that is that people are going for testing, all the effort we have put in over the last few weeks has been to encourage people to get tested.

“People were reluctant because of the time they have to isolate, but now we have put a package of support in for people if they test positive. We have to think that now we have got these figures, that’s a positive thing, because we can support them to isolate.

“That’s a different spin on it, rather than ‘Oh my God, those numbers are high again’. It’s because we are supporting people to get test and they don’t have to worry about having to isolate.”

The hotspot for the previous seven day period (week ending September 3) was Healey, Shawclough and Skye, where 14 cases were recorded.

Immediately north of Central Rochdale and Wardleworth, it also borders Whitworth, in Rossendale, which last week saw a spike linked to an outbreak at an out-of-hours school club.

However, Healey councillor Kieran Heakin believes there is unlikely to be a link between the two neighbouring areas – instead pointing to a growing ‘complacency’.

He said: “I see many examples of people not respecting those rules in shops, offices, and while socialising – I think it’s as simple as that.”

And he says youngsters – particularly those in their teens – have been lulled into a false sense of security during lockdown.

“I think young people have been lulled into complacency over the summer. It has been six months from March and they have been tied down and stuck inside, they have got a bit fed up,” added.

“It’s not so much children, children do what their parents say, I think it’s the teenagers that have had enough of it – that’s my suspicion anyway.”

The children’s services boss, whose son was hospitalised with the illness and ‘took a long time to recover’, also warned people not to underestimate the virus.

He said: “There’s a reason for the rules, it’s to prevent you getting what can be a very serious illness. There’s so much we don’t know about the disease at the moment.”