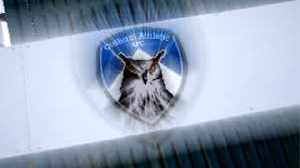 Two goals in the last five minutes earned Oldham Athletic a draw at home to Northampton.

Jonny Smith struck in the 89th minute to snatch a point for the struggling Latics, who had found themselves 2-0 down.

Northampton took the lead in the sixth minute through Matty Warburton.

Chris Lines' effort hit the post from close range and midfielder Warburton, a summer signing from Stockport County, latched on to the rebound to place it past Oldham goalkeeper Zeus De La Paz.

Smith then went close for the hosts, but his thunderbolt hit the side netting, while Filipe Morais curled his effort around the post after Northampton goalkeeper David Cornell had parried an earlier shot.

Northampton thought they had sealed a fourth successive win in the 80th minute when substitute Andy Williams drove the ball home after meeting Lines' pass.

But Oldham substitute Scott Wilson pulled one back five minutes later, before Smith's cross somehow found its way into the back of the net past a despairing Cornell.